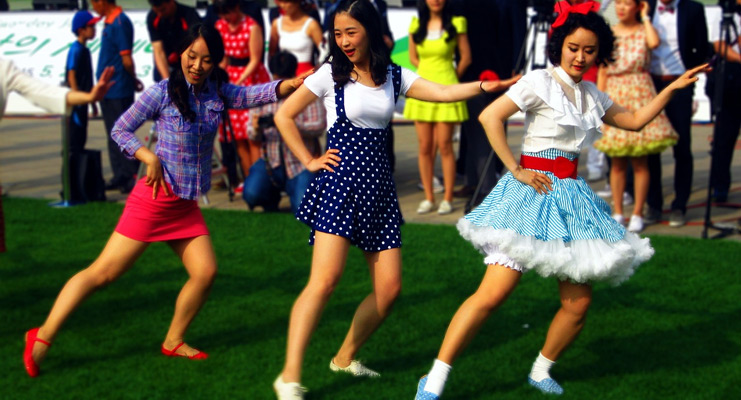 While Lindy Hop was originally danced to big band music, East Coast Swing and West Coast Swing were designed for dancing to a wider range of music, including rock & roll, blues, and country.

East Coast Swing music is typically characterized as fast-paced and energetic, focusing on big band, blues, or rock and roll styles. Today, East Coast Swing is often danced to upbeat pop music, which creates a more lively atmosphere. This style of Swing dancing is faster-paced than West Coast Swing and is known for its exciting moves and patterns.

West Coast Swing dancing has increased in popularity since you can dance it to various types of music, including slow and fast blues, contemporary music, hip hop, pop songs, top 40’s songs, and country songs. The speeds of the music for this type of swing generally vary between 90 and 120 beats per minute.

West Coast Swing dancers are encouraged to use their musicality to interpret the music they are dancing to. This is done by matching body movements to the sounds of the beats, “hitting the breaks” in the music with appropriate matching moves, and acting out the lyrics of the songs.

East Coast Swing is a high-energy dance characterized by bouncy rock steps and triple steps danced as a chasse. The dance is characterized by its bouncy and energetic movement. This is done through kicks and flicks of the legs and feet, as well as through swinging the hips. It often involves lifting the knees between steps, which helps showcase the music’s high energy.